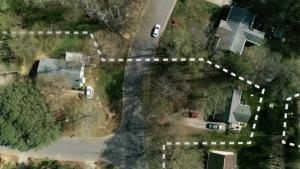 Created by Laura Poitras and Charlotte Cook, Field of Vision is a filmmaker-driven documentary initiative that commissions and creates original short-form nonfiction films about developing and ongoing stories from around the globe. This showcase of short documentaries informs, inspires, and illustrates the variety of ways that films can achieve Field of Vision’s investigative and journalistic objectives.  Presented by June Jennings, Impact and Partnership Manager at Field of Vision.
Nuuca (USA, 2018, 13 min) by Michelle Latimer
This cinematic documentary reflects on North Dakota’s recent oil boom. With a dramatic increase in workers, has come an influx of drugs, crime, and sexual violence. On the Fort Berthold Indian reservation in central North Dakota, rates of sexual violence and harassment have increased 168 percent, with Indigenous women most aﬀected.

Dancing With Le Pen (France, 2018, 22 min) by Nora Mandray
In France’s last presidential election, Marine Le Pen, a candidate for the right-wing National Rally party, won over 30 percent of the vote after an attempt to rebrand a party associated with her controversial father, Jean-Marie Le Pen. See how three of her supporters faced similar obstacles in changing the narrative.

The Trial (USA, 2019, 15 min) by Johanna Hamilton
Meet the lawyers tasked with defending a 9/11 suspect at Guantanamo Bay. Follow Alka Pradhan, James Connell, and Lt. Col. Sterling Thomas as they prepare for what is being called “the biggest criminal trial in U.S. history.” Their client is Ammar al-Baluchi, one of the five men facing the death penalty for plotting the attacks.

This presentation is co-sponsored by the Center for Media at Risk, UPenn’s Annenberg School for Communication