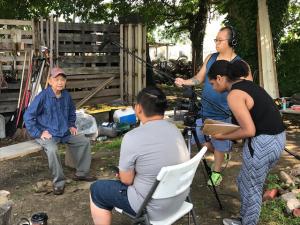 Wednesday, October 14 at 7:30 PM - We One, the Love and Life of Norris Homes by the residents of Norris Homes (North Philadelphia) and Resilient Roots by VietLead (Camden)

We One, the Love and Life of Norris Homes documents the history of a North Philadelphia public housing community affected by university expansion as well as governmental policy, and is told from the perspective of generations of former residents who lived at Norris Homes going back to its earliest days in the 1950’s.

Resilient Roots farm in East Camden was started by VietLead in 2012 as an intergenerational project between Vietnamese elder refugees and multi-ethnic youth. In this film, voices from the Resilient Roots family, community members, students, and elders capture their history of Camden and give testimony to the importance of community control of land and schools.

In Staying Put, listen as voices from the 1960s to the present day chronicle Philadelphia Chinatown’s history of community and resistance to external forces of development, gentrification, and erasure. This short documentary focuses on the ways in which the residents have organized and introduces the construction of Eastern Tower Community Center, which is being built in hopes of creating a vital shared community space.

St. Peter Claver Church, Mother Church of Black Catholics: Let Us PrAy, Let Us PrEy tells the story of a community formed around this religious and educational landmark at 12th and Lombard Streets and the struggle of the descendants of this parish to honor the history and promise of an institution, paid for by the labor of their ancestors.

Wednesday, October 28 at 7:30 PM - Preservation - Malcolm X Park by the Philadelphia Student Union (West Philadelphia) and Build Your Own Door by the Hayti Historical Society (Hayti/Coatesville)

Malcolm X Park at 52nd and Pine Streets, formerly known as Black Oak Park, is one of the oldest parks in West Philadelphia. Since its inception it has been home to generations of residents that come from all walks of life. Preservation details the efforts that community members and residents have made to ensure the park and its history lives on.

In 1936, Dr. Whittier Cinclair Atkinson, recognizing the healthcare needs of the Black community in segregated Coatesville, PA established a hospital to serve them. Build Your Own Door is a film history that looks at the importance of this institution to generations of community members in the Hayti neighborhood of Coatesville. “Build your own door,” was also Dr. Atkinson’s credo of how to respond to extraordinary challenges and the need for self-sufficiency.

An abandoned burial space, once owned by the historic Mother Bethel AME church, where more than 5,000 Black people were interred starting in 1810, was re-discovered underneath a Queen Village/Southwark playground. Bethel Burying Ground is both a story of the struggle to reclaim the overlooked history of Black people in the earliest days of Philadelphia, but also a story of the organizing, coalition building, and strategy employed by community members intent on preserving and memorializing, "ancestors of the African Diaspora.”

The Painted Bride Arts Center is a one-of-a-kind cultural engine. Born on South Street, but based for the past 40 years in Old City, Painted Bride Art Center: Deep Roots, Bold Future highlights some of the precious people who have been a part of this institution over the last 50 years.